3 Key Things to know about STT-MRAM – #2 Can you have High-Reliability STT-MRAM?

MRAM is widely expected to combine the density of DRAM, the speed of SRAM and non-volatility and reliability of F-RAM (practically unlimited endurance and data retention) to yield a universal memory. Toggle MRAM (first generation MRAM) enabled non-volatile memory that featured practically unlimited endurance, long term data retention and speeds fast enough to be the fastest non-volatile memory of its time. However, it could not yield densities comparable to DRAM or write speeds comparable to SRAM.

The very first STT-MRAM implementation was able to yield densities in the range of DRAM density and faster speeds than Toggle MRAM, but compromised on the non-volatility aspect – these products have lower endurance and much lower data retention. Out of this emerged a false narrative that STT-MRAM is not for industrial and aerospace applications.

That this narrative is not true is clear from Avalanche Technology’s proprietary STT-MRAM technology, which is optimized for reliability. STT-MRAM can enable both higher density and high reliability non-volatile memory. Avalanche’s Persistent SRAM products utilize a state-of-the-art perpendicular Magnetic Tunnel Junction that is optimized to provide endurance up to 1014 write cycles and data retention that exceeds requirements of any known application at temperatures up to 105OC (at what point can we say data retention is forever?). These products are being designed into high reliability industrial and aerospace applications.

See Figures 1 and 2 for a comparison of Avalanche STT-MRAM with Toggle MRAM and competitive STT-MRAM. 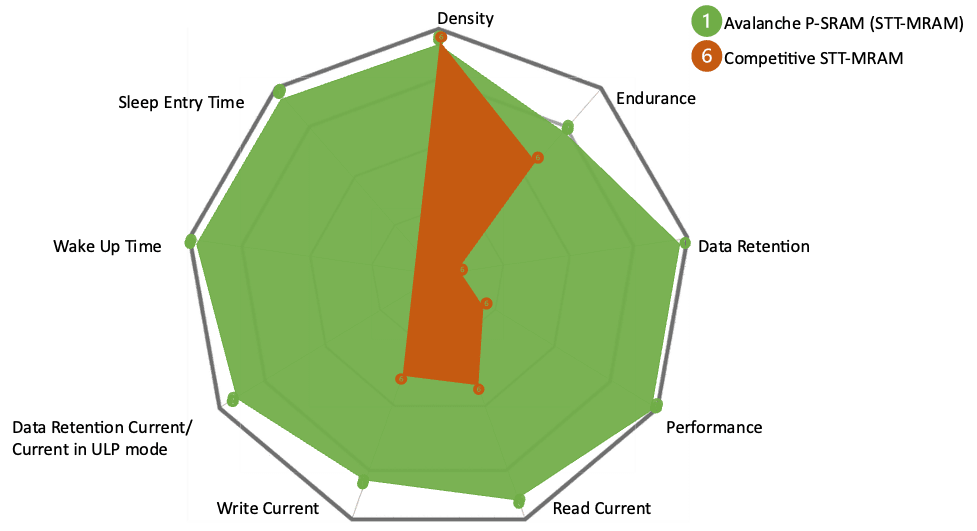 If you are curious about how Avalanche’s STT-MRAM stacks up against other commonly used memories in industrial applications read our earlier blog post “How We Built the Best Non-Volatile Memory for Industrial Automation and IIoT Applications Using STT-MRAM” HERE.