Spin Transfer Torque Magnetic Random Access Memory (STT-MRAM) is the latest design in the non-volatile magnetic RAM (MRAM) family. The information storage in STT-MRAM is a Magnetic Tunnel Junction (MTJ) instead of electric charges, which makes the difference between it and conventional RAM.

STT-MRAM changes the magnetic direction of the free layer by directly passing a spin-polarized current through the MTJ structure. This gives the STT-MRAMs scalability, which means the threshold current to make the state reversal will decrease as the size of the MTJ becomes smaller. This characteristic also provides STT-MRAM greater immunity from stray magnetic fields compared to Toggle MRAM. 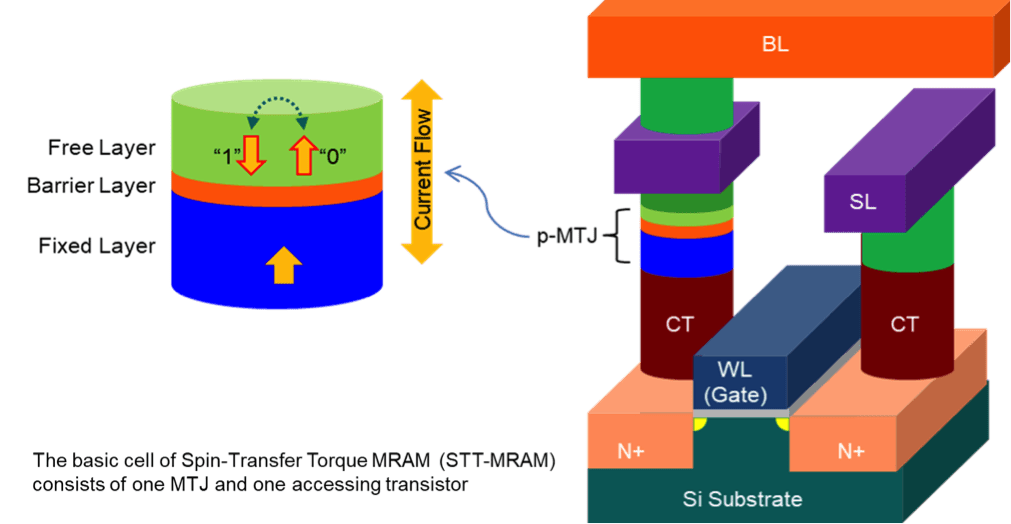 Read Operations: Read operation begins when the wordline (WL) is selected and a voltage is applied between the bit-line (BL) and the source-line (SL). Current will pass through the MTJ or not depending on the state of the MTJ which can be sensed/measured.

Write Operations: Write operation begins when the WL is selected and a positive voltage difference is established between SL and BL for writing a “Logic 0” or a negative voltage difference is established to write a “Logic 1”. The current amplitude required to ensure a successful write is related to the material of the tunnel barrier layer, the writing pulse duration, and the MTJ geometry.