Industrial robots are programmable, electromechanical devices used in the place of a person to perform repetitive and sometime dangerous tasks. They are often automated and capable of movement around three or more axis. Industrial robots are commonly used in applications like welding, painting, ironing, assembly, pick and place, palletizing, product inspection, and testing, all accomplished with high endurance, speed, and precision.

Robots have come a long way from the initial concept, a crane like structure that could stack wooden blocks (in 1937) to the first commercial product from Unimation (in 1956) which could be programmed to transfer objects from one point to another. The next major development was introduction of 6-axis articulated robotic arms which expanded use to more sophisticated applications such as assembly and welding. Today there are specialized robots for tasks as diverse as assembly, product inspection, material handling in warehouses, medical applications, and nuclear reactor inspection.

All robots have position control circuitry that resides on actuator boards and a system control board. Some robots, particularly those used for inspection purposes, have a camera in the place of end-of-arm tooling. Figure 1 shows the block diagram of a basic robot. Position data from the resolver as well as performance data of the stepper motor is logged in the MRAM and uploaded into edge/cloud servers to enable resumption of service in case of interruptions, predictive maintenance, and productivity/quality enhancements. 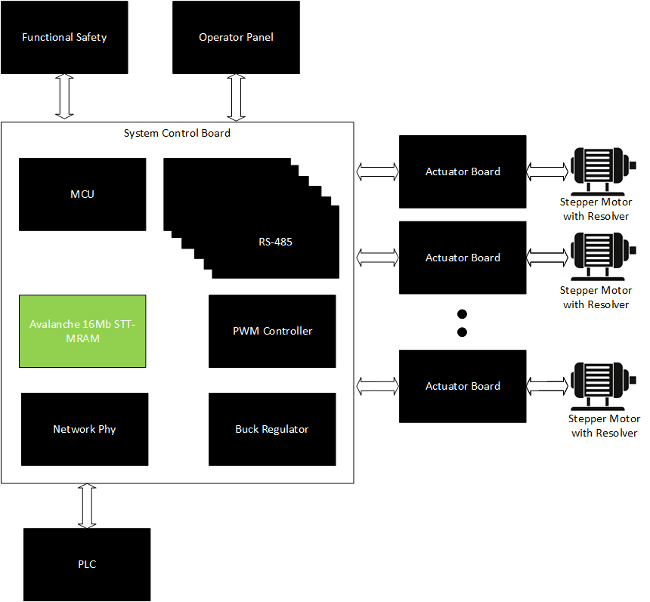 If the robot is provisioned for inspection applications, it will have an additional camera. The block diagram for such an application will include a camera board as shown in Figure 2. These boards require a larger MRAM to buffer the captured images before they are transferred to the operator panels/monitors. 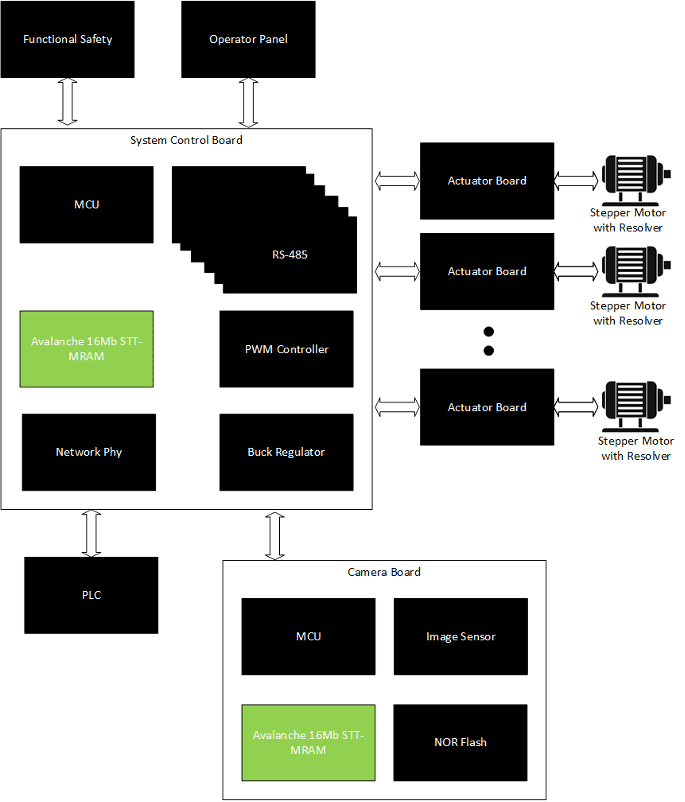 Figure 2. Camera Subsystem in a Robot

Data logging applications require memory with Persistence, High-Endurance and Fast-Write. Persistence is needed to retain data when power is removed. The memory needs to have high endurance because sensor data is continually written to it. It is uploaded in batches and deleted to make room for new data. This cyclical write-and-erase behavior requires high endurance. Fast writes help preserve data integrity in case there is unexpected power loss. Special purpose robots such as those used for inspecting nuclear reactors have additional requirements related to high reliability operation in an environment where radiation is present. These requirements are met perfectly by Avalanche Technology’s STT-MRAM.

Avalanche’s Persistent SRAM (P-SRAM) products are based on proprietary highly reliable STT-MRAM technology. These products offer truly non-volatile, random access memories that are ideal for applications that must store and retrieve data without incurring large latency penalties. They offer low power, and virtually infinite endurance and retention, and are ideal for non-volatile memory applications such as program storage and data logging in Industrial Robots, Factory Automation, Motor Control, Human Machine Interfaces, Smart Meters, and Multifunction Printers. P-SRAM products are available in a standard 35 nanosecond asynchronous SRAM interface as well as standard SPI and high-performance Q-SPI interfaces. While the parallel interface products enable easy migration from BB-SRAM implementations, the serial interface products simplify board design and are available in small footprint packages that are ideal for form-factor-constrained Industrial Internet of Things and Industry 4.0 applications.